next to normal at arts after hours 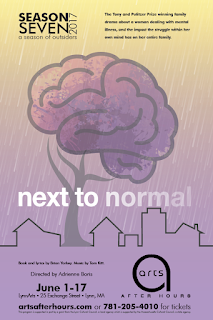 One of the joys of attending local theatre is to see the creative interpretations of established shows.

One of the other joys is to see the off-the-chart talents of cast and crew.

Such is the case for next to normal, currently being performed at arts after hours in Lynn, MA.

Not to give too much away, but Kayla Cantrall's set design is nothing shy of brilliant. The stage is literally broken up in several parts and takes place in a three-quarter thrust, establishing the claustrophobic tug-of-war that is Diana's mind.

Katie Pickett as Diana and the rest of her cast have created some bold, daring choices that work perfectly. Pickett introduces her character as calm and content in "Another Day" until an event triggers her into a frenzy of facial tics and haunting eye movements that are literally in our faces.

Corey Jackson's Dan displays the proper balance of frustration and support for his long-suffering wife. His pitch perfect tenor beautifully expresses his own long-suffering attempt at finding patience and understanding.

Alex Grover has successfully created two separate characters in Dr. Fine and Dr. Madden. His doctors show how they too struggle with maintaining balance between professional distance and creating personal space.

Siobhan Carroll accomplishes the challenge of maintaining a staid, neutral Natalie as suggested by the song "Super Boy and the Invisible Girl." As she attempts to remain under the radar, you just can't take your eyes off her.

Nicolas Fernandez's Gabe is wonderfully less cocky and more sympathetic, preventing the complex character as coming across too confrontational.

The production comes alive under the sensitive direction of Adrienne Boris, complemented by the outstanding lighting design by Keithlyn Parkman. Musical Director Bethany Aiken finds the perfect harmonies and knows when to punctuate specific moments.

This is this pundit's sixth viewing of next to normal in as many theatre companies, and the show does not become any easier. It should be breathlessly devastating, and this production will leave you devastatingly breathless.